To consider tree evolution, it is necessary to establish the definition of a “tree.” Botanists today describe a tree as a woody, perennial, flowering plant with an elongated stem or stems, with branches and leaves. In current common usage, palms, ferns, bananas and bamboos are also referred to as trees, but are not considered here. 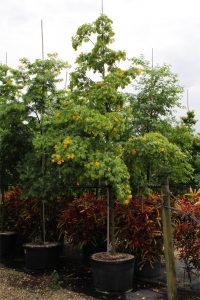 Considering fossil evidence, true trees did not evolve until some 400 million years ago. At that time, trees had to have characteristics of evolutionary features of strength, built by rings of growth to support increasing height and weight. A protective bark to shield conductive cells moving water and nutrients up the tree, supportive collars of extra wood surrounding branches; and of additional internal layers of wood at branch junctions to prevent breakage.

For instance, the evolution of Archaeopteris to those qualities, a now extinct tree, position it as the first modern tree; it made up the forests over most of the earth’s surface at that distant time. Archaeopteris had an extensive root system, bore lateral branches with leaves; and is calculated to have grown to a height of 90 feet. It differed from the trees of today because it reproduced by spores, like ferns.

The first trees to produce seeds were the gymnosperms (gingko, conifers) which emerged about 390 million years ago. Much later, angiosperms appear in the fossil record some 125 million years ago.  With evidence of flowers, fruits and seeds, and diversified rapidly. Angiosperms did not evolve from gymnosperms; they evolved in parallel with them. But it is not yet clear as to what type of plant really gave rise to the angiosperms. Once the angiosperms appeared, they quickly (in geologic terms) outnumbered and became more diverse over the earth than the gymnosperms. 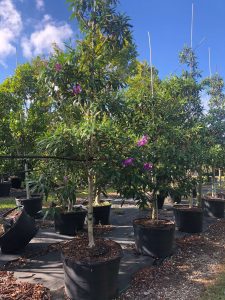 Flowering plants taken together represent the most diverse group of the earth’s organisms; in terms of size and significance, trees are clearly the largest and most important. Flowers come in an amazing display of shape, size, color, fragrance and arrangement. Most flowers and their pollinators have a symbiotic relationship with distinctive flower features reflecting the nature of the pollinator. The relationship between flower characteristics and their pollinators is an excellent examples of coevolution.

Despite the efforts by botanists to identify all the world’s trees, and other plants as well, the picture still remains incomplete. In the remoter places of the earth’s forests, there are doubtless new species or even genera of trees to be discovered and described. In some instances, the rapid deforestation which is taking place on a global basis is rendering extinct tree species which have never been fully described. Global climate change could lead, as well, to numerous extinctions. These diminish the gene pool on which tree evolution is based. But in the surviving forests, tree evolution continues, albeit at a very slow pace.

Trees have an exceptional range of life span, from about 50 years in many species to very long-lived like a Bristlecone Pine calculated to be 4,800 years of age. Also, trees have a remarkable range in terms of adult height. In the Artic, the dwarf willow may reach a height of about 2 inches, while a champion Redwood tree stands some 380 feet tall.