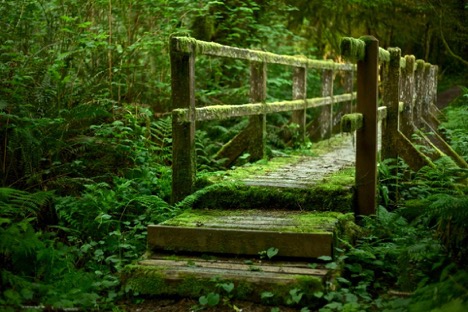 More on weeds in trees (part 2) : Vines, Stranglers, Algae and Moss. For more on the subject see Part 1  -the Introduction to this topic-.

Continuing with on the subject of weeds in trees (part 2), we have Vines. This is a group of weedy or woody plants, climbers, mainly rooted in the ground; but in need to ascend trees or shrubs to reach sufficient light for full growth and seed production.

This group includes the large woody vines, lianas, common in tropical forests. Vines climb either by twining, encircling the trunk and moving upward; or by going straight up the trunk by attaching themselves to the tree bark by means of special organs (tendrils). Besides, vines use host trees for support, just like arboreal epiphytes. The damage vine weeds inflict of the host tree is by adding weight to branches, which may cause breakage; and they compete for light, shading out host tree leaf growth. In extreme cases, vines can overwhelm a tree and kill their host! Being at the tree base, vines also compete with their host for soil moisture and nutrients.

Many examples of invasive vines exist; among them wild grape, wisteria, English ivy, Virginia creeper and, worst of all, kudzu. It is important to control heavy infestations of any vine, in order to allow the host tree to grow normally. Manual weeding is relatively easy by cutting off the vine near the ground; the vine then dies and slowly decomposes. However, weeding may require repeated cuttings as the vines are fast-growing and aggressive, and the roots may take some time to die.

Chemical control is also possible, but with some risk of harming the host tree. The best approach is to cut away any vines before they become a problem.

Stranglers. The extreme example of a tree weed are the strangler figs. Their life cycle is fascinating. The sticky seeds are dispersed by fruit-eating birds in to the canopy of a host tree where they lodge and germinate. The fig grows as an epiphyte on the host; growing down the trunk to the ground where they strike root and compete for soil nutrients. Once they develop a root system, aerial roots ascent the tree, wrap around the trunk, infest the crown and eventually shade and strangle the host tree to death. As the host tree decays, the strangler fig is left with a hollow core.

The spontaneous occurrence of a strangler on a tree can be controlled by preventing the aerial roots from rooting by pruning will stop it from further development. Stranger figs can cultivated in large open areas as interesting ornamentals which will spread and form a compound structure of trees. 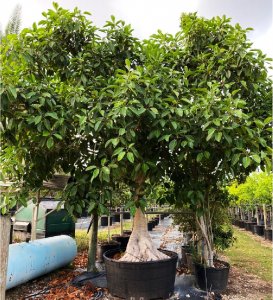 Algae, Lichens and Moss. All three of these lower plant forms may occur on the branches and stems of trees; they derive their nourishment from the air, water and photosynthesis. Algae is a typically green, powdery growth. Lichens are chiefly gray to green in color and appear as crusty patches. Mosses may form large green to yellowish cushiony tufts.

These plants colonize rocks and other surfaces as well as trees, always preferring damp, shady sites. Sometimes robust growth of these plants is an indication that the host plant lacks vigor and they may appear in increased numbers on dying trees. These plants depend upon the host plant for a substrate, but do no direct harm to the host tree. Their presence, in fact, can be attractive on a tree trunk. Mosses and lichens provide nesting material and food for wildlife.

For the gardener, tree weeds should be identified and appropriate management steps taken as deemed necessary.

For more information on the subject or any other concern, feel free to contact us!