Home » Blog » All About Tabebuia Trees

All About Tabebuia Trees 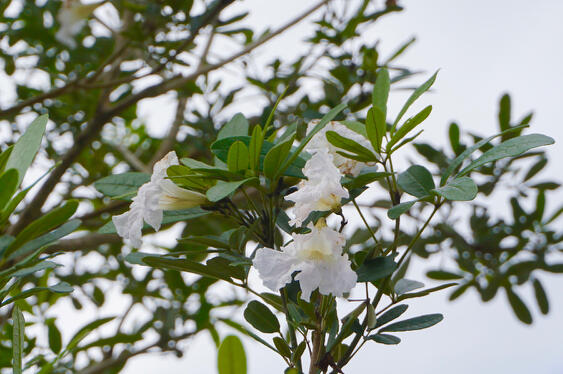 05/20/2020
By admin
Uncategorized
Tabebuias trees belong to the bignonia plant family, a very large, mostly tropical plant family encircling the earth; most prominently for its highly ornamental flowering trees. Additionally, trees of the genus Tabebuia occur naturally only in the New World tropics and are perhaps the best known ornamentals of the entire bignonia family. 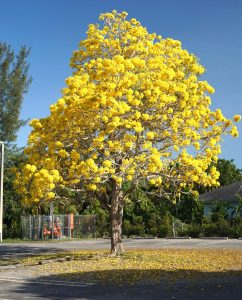 Tabebuias are native to both the subtropics and tropics, extending from Mexico in the north to Argentina in the south; and including the Caribbean. Also, the greatest species diversity is in Cuba and the Island of Hispaniola (Haiti and the Dominican Republic).
The generic name tabebuia comes from the Tupi language in South America and means ant tree, in apparent reference to ants inhabiting it. In addition to being outstanding ornamental trees, several species are also important timber sources. As, Tabebuia wood is of medium weight, durable and popular for decking; the wood is known as ipe in the lumber trade.

From Tabebuia Trees to Handroanthus

A study in 1992 described 100 species of Tabebuia. Hence, the subsequent research led to name changes and some species now belong to the genera Handroanthus and Roseodendron.  Leaving  67  species of Tabebuia that have been acknowledge. The scientific name changes has in no way change the fact that tabebuias are spectacular tropical forest trees.
Furthermore, it is a remarkable experience to see these vividly- color trees in bloom in nature as they stand out in striking contrast to the almost monochromatic green of the forest. Tabebuias are evergreen or seasonally deciduous. In the latter case dropping their leaves for a short time in the cooler season of the year; at which time the flowers are borne. This habit makes flowering more attractive because the blooms are so visible and the tree has no competing leaves. 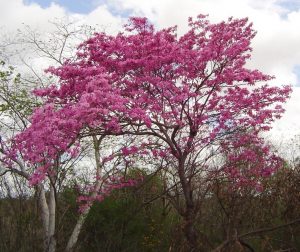 About a dozen tabebuias are popular as ornamental flowering trees, and range in height from 15 to over 100 feet. Colors of the trumpet-shape flowers include white, yellow, pink and purple, with gradations in between. Besides, Tabebuia flower nectar is a food source for hummingbirds and bees. The tree is popular in Latin America.  For example, Tabebuia rosea is the national tree of El Salvador. And, at Treeworld we have available 9 species of this outstanding tree; from which to select the best plants for landscaping any residential, commercial or public location.